Rust & Your Vehicle: The Importance of Undercoating

Rust & Your Vehicle: The Importance of Undercoating

Rust and your car – when is rust a problem?

Rust forms when steel oxidizes and forms a coat of iron oxide - the easily recognizable patches of reddish-brown flakes and bubbling. Major culprits of rust include rain, humidity, snow and salt, and once it starts, it spreads quickly!

Rust can have varying degrees of severity, depending on how much and where it is located. Rust on the paint surface of your car isn’t as significant of a problem, although it is ugly. It usually occurs after a rock chip penetrates the paint and causes the exposed metal to react with water, air and other contaminants. It takes minimal time and effort to fix this, whether you have it done at an autobody shop or do it yourself using a rust pen and touch up paint.

The rust spots you really need to be concerned about are visible on the seams of the body panel, along the fenders, and on the underside of your vehicle. If not taken care of, corrosion on the car can create a hole in the body and cause significant safety problems. Frame rust is a big concern that can impact the car’s integrity, sometimes resulting in parts snapping or breaking and ultimately diminishing a car’s ability to protect in a crash. Rusty brake lines and gas lines can be expensive to replace.

Unfortunately, the more severe rust is often worsened during the upcoming winter months!

Canada has some tough winters and roads (particularly in the city) are usually laden with road salt from mid-November through to early March (depending on how tough Mother Nature is on us, of course).

While road salt and other forms of ice melter are necessary for safe driving and staying sure-footed on the sidewalks, they can do a lot of damage to your vehicle. Road salt is extremely corrosive and accelerates rusting on your vehicle. Given that most of the underbody of your vehicle is open, the majority of salt damage occurs on the bottom of the car. It is difficult to visually detect and can cause significant damage very quickly. Water and salt that sprays up on the underside of your vehicle tends to stick there and rapidly corrode your vehicle’s vital components.

But, don’t fret, there are steps you can take to prevent corrosion and damage to your vehicle!

Preventing corrosion and damage to your vehicle

Washing your car regularly during the winter months is vital to battling the harming effects of salt on your car. Once every week or two is appropriate, but we know this isn’t always possible, so it’s a good idea to have your car undercoated too.

Having your car body undercoated annually with an oil spray is the best way to defend your car against road salt. Oil spraying involves covering the underside of your car with a coat of oil which protects it against rust. Oil sprays creeps into the seams, folds, joints and weld spots where rust often starts, as well as protecting your electrical components, brake, and fuel lines against corrosion. 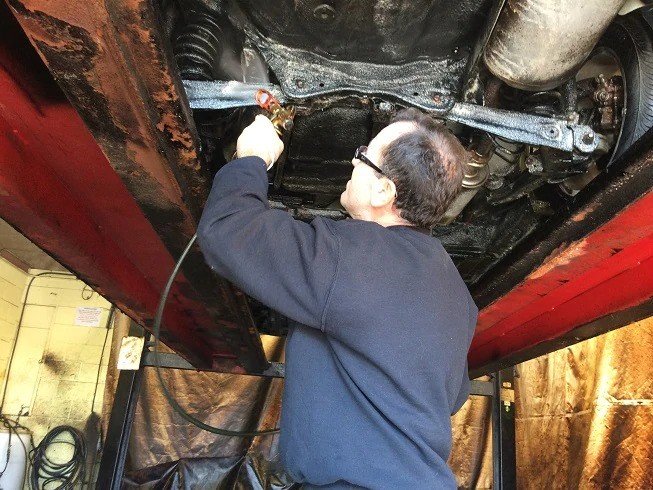 Many vehicle owners swear by it, crediting the process for keeping their vehicle rust-free for years, and even decades! 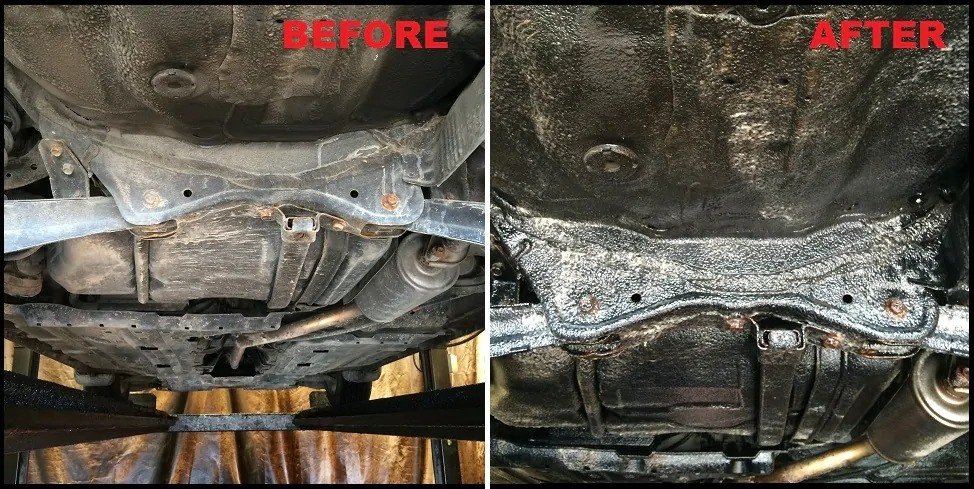 ABOVE: Before and after pictures of oil sprayed undercarriage of 2012 Honda Civic

Bustard Chrysler’s Fine Details department offer dripless oil rustproofing to keep your car protected during the harsh winter months. Call us at (519) 884-5868 for more information or to book your appointment.