What's In a Name?

So, who are we? Our story is compelling, and we're telling it because we hope that after reading it, you will not only want to visit us, but will feel far more confident and comfortable doing so.

There was a time not long ago when people were more hesitant to buy from someone they didn't know. There were more towns, fewer cities, and townspeople knew one another. Word-of-mouth was the primary form of advertising, and for automobile retailers, reputation mattered. In fact, reputation was everything. People were unlikely to purchase a vehicle from a dealer unless their father or brother or aunt or workmate had already done so, and with a good experience. A vehicle would eventually need servicing, and parts, and there might not be another dealership of the same brand for miles. So, trust was necessary. Relationships were everything.

These principles formed the backbone of the original Bustard Brothers Chevrolet-Oldsmobile-Buick dealership in Matheson, Northern Ontario (known these days as Black River-Matheson), about 9 hours north of Waterloo. The history of the Bustard Brothers dealership centers on family and loyalty, and helps to explain the atmosphere inside our dealership today. To know us is to know our history... 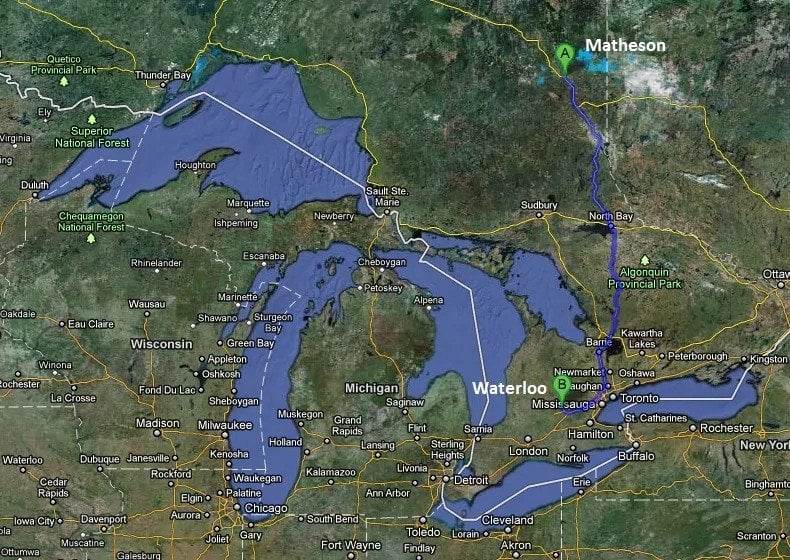 Prior to opening the dealership, brothers Ross and Robert arrived in Matheson with their father in 1928, in search of a dairy farm. As dairy farmers, the family was both hard-working and enterprising. They began selling milk almost immediately, and by 1945, they had grown their operation to the point of being the sole milk delivery organization for all of Matheson and surrounding area. However, running such a large delivery business gave the brothers exposure to the automotive world, and they enjoyed this even more. So, after a few years of toying with the idea, in 1947, brothers Ross and Rob dove in and purchased their own Chev-Olds-Buick dealership.

As the only retailers of these brands within Matheson and miles around, the brothers were busy. Indeed, the dealership became the largest provider of heavy-duty trucks north of Toronto. Bustard Brothers was growing quickly and needed help. So, they did what any reasonable people would do - Ross and his wife Edith had eight children. Over the long history of the business, all of the children, and various other family members, worked in the dealership at one point or another. This experience stuck with some of the children more than others. Three of the boys, brothers Bill, Rob, and John, felt the greatest attachment to the dealership. They worked alongside their father and uncle Robert day after day, meeting customers, servicing vehicles, fully immersing themselves over time in the culture, learning the value of relationships, trust, keeping promises. When the time was right, in 1985, the brothers officially took over the operation of the dealership from their father and uncle, and continued the tradition. Over the years, the business became a Matheson landmark, a cornerstone of the community, employing up to 36 technicians and a total staff of 60 people at its peak, and providing thousands of vehicles to the small community of 900 and surrounding areas. In 1981, when General Motors was dividing its four lines (Chevrolet, Oldsmobile, Pontiac, and Buick), the brothers chose to focus on Chevrolet and Oldsmobile products. 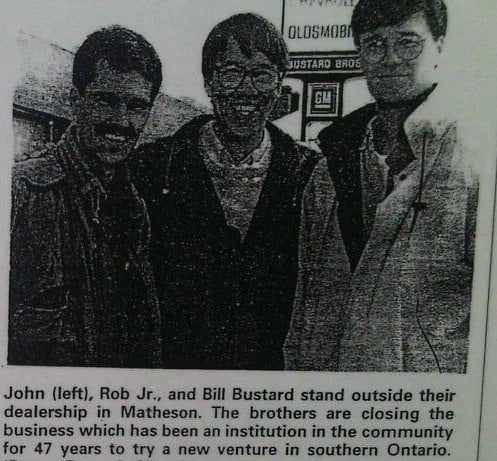 1994 was a pivotal year for Bustard Brothers Chev-Olds. By this time, General Motors had made it clear that they were restructuring in such a way as to favour larger, rather than smaller operations. Bill, Rob, and John recognized the signs, and despite their love for Matheson and its community, knew they would have to choose a new home for the Bustard Brothers dealership if it was to survive. Waterloo was an easy choice, with its universities, promising demographics, diverse and growing population, and outstanding support for business. Once the decision was made, it was time to tell the Matheson community. Emotions were mixed - the sadness of leaving a supportive and tightly integrated community, and the excitement of embracing a new one, and its possibilities for meeting new people, sharing the Bustard experience, and proving themselves to a brand new group of customers. Before leaving, the brothers threw a going-away party, as an opportunity to thank the community that they had served, and which had supported them, for so many years. After this, the challenges were logistical ? the brothers purchased the old Conestoga Chrysler building in Waterloo, and set up shop as the new Bustard Brothers Chrysler-Plymouth-Jeep-Eagle dealership.

In its long history (47 years, nearly half a century), the Matheson dealership proudly served second- and even third-generation purchasers, directly showing the importance of earning a reputation through trust and quality service. This lesson was not lost on the brothers, and was carried with them to their new location in Waterloo. Since 1994, a faithful adherence to these principles has allowed the Waterloo dealership to flourish, serving more customers every year, re-establishing the tradition of service and loyalty that began in 1947. There was never any mistaking this - the brothers understood from watching their father and uncle that growth can occur only via reputation, through the earning of trust, the keeping of promises. This is still an integral driver of the Bustard approach today.

In 1998, John Bustard decided that a personal career change was in order, and moved to Collingwood to become a pastor, leaving brothers Rob and Bill to run the dealership. In 2004, Rob Bustard also decided that a change was in order, and stepped aside to allow Bill to run the business with a new partner, Brent Ravelle, General Sales Manager at the time, who in values and work ethic had proven himself an excellent fit within the Bustard family business. Bill and Brent stayed true to the original Bustard Brothers values, earning customer loyalty over time, and in late 2009 were able to expand in a big way, with a new dealership location in Listowel, Ontario, in the old Listowel Chrysler building.

It hasn't been all smooth sailing. The financial crisis of 2008 (to which Bill attributes most of his grey hair) had a large impact on the Bustard dealerships, as it did on so many businesses. The Bustard family remembers this as one of their greatest challenges. A business with such a clear family focus tends to attract and retain staff with families of their own, so most of the Bustard personnel had spouses or children to care for when the crisis hit. In short, the Bustard values of operating as a "family" were directly challenged. The challenge was accepted, and Bill is proud to note that in a time when other dealerships were laying off 50% of their staff or more, the Bustard dealerships found ways to retain over 90%, and to assist the others. This is meaningful in its demonstration of commitment, extended to staff as well as customers.

In 2017, Bill and Brent acquired a third location – Listowel Ford. Over the three years that followed, Bill and his son, General Sales Manager Josh Bustard, continued to focus on building the Bustard Waterloo brand, while Brent focused his energies as Managing Partner of the two Listowel locations. As of August 1st, 2020, Brent purchased the remaining shares of the Listowel locations from Bill, and rebranded Bustard Listowel as Listowel Chrysler, which would operate in partnership with Listowel Ford. Bustard Chrysler Waterloo will continue to operate as an independent entity, headed by the Bustard family as it has been for 73 years. We are so grateful for Brent, and the rest of the Listowel stores’ staff, for their support over the years, and we are excited to witness their inevitable growth in the rapidly expanding community of Listowel. Bustard Chrysler Waterloo remains committed to serving you with quality new and used inventory, parts, and safe and reliable service, and we are excited to continue our growth in the wonderful community of Waterloo.

Bill can be found most days at Bustard Chrysler Waterloo, while his son Josh handles most of the day-to-day operations in partnership with our phenomenal management team. To this day, their philosophy reflects that of the original family business in Matheson: "If you don't know who you are and what you stand for, you won't do the right thing. When you know that, it's actually easy to do the right thing." This permeates the Bustard culture, and for Bill the rules are simple: "Take complete care of our customers. If you make a mistake, own up to it, then fix it." Bustard employees are empowered more than in the average dealership - each is authorized to take any reasonable steps necessary for the satisfaction of their customers.

So, what's in a name? Can customers actually expect a different experience in a family-based dealership? Absolutely. In the name "Bustard" is a strong history and legacy of genuine relationships, fair treatment, quality service, a kind internal culture, and family values.

The proof is in the pudding: Several Bustard family members still work at the dealerships; 15 Bustard employees (in addition to family members) have tenure of 10 years of more; and a substantially higher-than-industry-average percentage of Bustard's business is repeat business - the result of building relationships and keeping promises over time.

There's an old saying: "If you really stand behind something, put your name on it." We do!