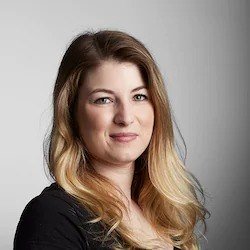 Katie Kelly was born and raised in Kitchener. Prior to joining the Bustard Chrysler team, Katie was in high school, working at a local grocery store as most high schoolers do. In 2009, Katie was working various part-time jobs to get through university when her neighbor (and our Parts Director!) Cathy Mainprize let her know of a part-time reception job opening here at Bustard Chrysler. She started working at the dealership and never left – with almost 12 years under her belt, having worked her way up to our accounting department.

The first vehicle Katie ever drove was a 2000 Chevy Cavalier, but the first vehicle she purchased herself was a 2002 Volkswagen Beetle (which she still owns!). When asked which vehicle was her favourite, Katie has difficulty deciding but settles on a tie between her Beetle, and her current vehicle - a Volkswagen GTI. If she could own any Stellantis vehicle, she would be thrilled with anything SRT – preferably a Charger or a Challenger, but a Grand Cherokee SRT would do as well!